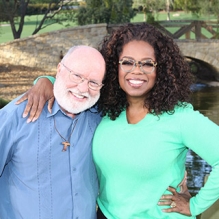 Tomorrow Father Richard Rohr will be joining us with his inaugural post on Emerging Voices. Holly and Teresa are both formal students of Father Rohr in his Living School for Action and Contemplation. But many of us in the community are greatly influenced by his work and teachings. You have the opportunity to view a conversation between Father Rohr and Oprah on her Super Soul Sunday February 8th. It is rare for a Franciscan and contemplative, an order always on the fringes of Catholoicism, to have access to this large of a platform to speak to an entire nation. By nature, Franciscans are wary of “bigness,” but we take this as a sign that the broader culture is hungry for spiritual practice and wisdom. We are delighted to see Father Rohr on television and appreciate his willingness to step out and teach contemplative spirituality to the mainstream culture.

There seems to be a moment in every story, where things have to change in order to move forward. We see moments in history in all movements and paradigms where new life needs to bloom and, in response to this need, fresh ingredients come together — to transform life and community into a new manifestation of what came before. This is why humanity and its lexicon created terms like “paradigm shift” and “new wave” in movements. Like the shifting of terra, the tectonic plates of culture and society have to move to accommodate changes in the earth’s structure. Into this space, we at Emerging Voices and other voices emerging from progressive Christianity have begun to speak, contemplate, and act into this new space of the progressive and emergent conversation.

Teresa Pasquale: My work as a therapist has historically been to provide space and planning around the individual experience of these emotionally tectonic shifts. I have been trained to see the spaces where transformation is possible in a human life and to help identify that moment for people. Then my role is to hold the door open long enough for my clients to see the narrow gate of healing, and walk through it. However, in therapy as much as in community, walking through the open door is always a choice. We all have the choice to move through the difficult, dark, and broken places into the light of a new wave of life. We all, also, have the choice to stand still, if we want.

In the recent years, I have begun learning that this potential for transformation is equally possible, and equally complex, in community groups and movements. In the last year or so, I have brought my work of individualized healing and transformation into the context of community — namely this community of shared faith and hope and grace that is Emergence. It has been powerful work, and I have been humbled by the content and heart of the struggles I find in community with emergent folks, as well as the powerfully difficult task in front of all of us — to walk through the “narrow gate” or not.

For the last couple of semesters in my social work classes, I have spoken with my students about something I have been calling a “New Wave of Civil Rights.” This new wave has been showing up in the Progressive Christian movement and beyond in such places as the Forward Together Moral Movement, LGBTQ Equality, and Black Lives Matter.  What I’m coming to realize, as a person, as a therapist, as a fumbling contemplative speaking into emergence, is that the Emergent Church community has an opportunity to catch — and participate in — this very same wave.

What defines this new wave?

Teresa: It is grounded in action and contemplation. This dynamism between inner and outer life forms the cornerstone of my own theology as I have learned it from master teachers such as (but not exclusively) Richard Rohr, Cynthia Bourgeault, the late Marcus Borg, Thomas Merton, and Brian McLaren. Their teachings and understandings of the nondual way of pairing action and contemplation exemplify the ancient-future truths spoken ages ago by mystics (also known as contemplatives) like Teresa of Avila, Julian of Norwich, Catherine of Sienna, Meister Eckhart, and John of the Cross. It is the timeless ownership of beloved community embodied in the lives of contemplative actioners like Martin Luther King, Jr., Mahatma Gandhi, Cesar Chavez, and Dorothy Day. It is the work of reconciliation done by people like Desmond Tutu, Thich Naht Hanh, and Nelson Mandela. It is the healing work of people like Bessel van der Kolk, Brene Brown, Gabor Mate, Pat Ogden, and Peter Levine.

This new wave, as I see it, moves beyond woundedness. It honors and acknowledges sacred wounds, but it promises the potential for healing on the other side of hurt and the capacity for transformation in every human life — because being hurt is not the point. God wants us to be whole. Healing is the process, and wholeness is the point. And we are made to heal. The power of contemporary science is that it validates everything the universe and its inhabitants, on our best of days, have intuitively known to be true — that we all have the capacity to heal. We all have the right, as autonomous beings, to live in hurt and rage in perpetuity, if we so choose. But we do so consciously, eyes-open, with the knowledge that there is transformation beyond hurt. We don’t heal in lieu of justice but because the most transformed version of justice — for abuse, trauma, racism, sexism, homophobia — only comes from the transformed heart.

Robyn Henderson-Espinoza: New-wavers are not just thinking or intellectualizing in a postmodern framework, they are striving to practice and adopt postmodern behaviors, an orientation that seeks to destabilize and disrupt systems that are death-bringing. New-wavers are less interested in arguing on Facebook than sitting in respectful dialogue where opposing dualities are both honored and heard.  New-wavers are about seeking to move beyond the oppositionality of “liberal” and “conservative” to help bring about a truly radical community of liberation for all.

What are the advantages of maintaining threads of connection from the new wave to the old wave from which it emerged?

Steve Knight: People who have been hurt by the founding generation of the Emergent movement often proclaim that the new wave needs to completely disassociate from Emergence Christianity. I see it differently. I believe deeply that, in order to know our movement DNA, we need to learn from both our wins and losses, to site our examples, tell our stories and know where we come from. Spiral Dynamics instructs us to “transcend and include,” like the evolution of DNA, movements need the base material of what made us with the ever-motivating pull of doing it better.

Mike Morrell: One of my favorite living Christian spiritual teachers, Cynthia Bourgeault, teaches this concept called the Law of Three. It’s too much to give full justice to in this space, but the upshot — the “so what?” factor — is this:

There are always more than just binaries at play. Our current narrative and frequent experience is, two sides become locked in a kind of dualistic rivalry. But what the Law of Three proposes is that, if we cultivate a carefully attuned awareness, we’ll recognize that there’s always a third, (as Bourgeault says) “reconciling force, or energy, [that] emerges as a totally independent force out of a capacity to hold these opposites.”

It’s not merely a synthesis, like in Hegelian dialectic, but a genuine “third force” — of novelty and truly fresh perspective. This third force doesn’t invalidate first and second forces — the two that find themselves opposing each other. Instead, third force redeems these, by showing a higher purpose they were serving all along.

Keeping this in mind (and truly, there’s a lot more to it) has helped me see seemingly intractable conflicts in a new light. It puts flesh on the bones of Richard Rohr’s idea that everything belongs, including — especially! — the things I don’t like. I find, on the other side, that my enemy is actually my ally in disguise.

Holly: I love the way Brian McLaren called upon the church to repentance for 20 centuries of crimes, then ceded his time to Navajo Mark Charles at Christianity 21 featured in the video below. And I love the way Jacqui Lewis, of Middle Church in NYC, says, “I am dreaming of a church that is activated to dismantle racism, because I think we can.” It’s critical to celebrate and lift up our wins in the movement. These statements from main stage at C21 exemplify the shift we are trying to describe here.

Teresa: Into this space we breathe this new wave of emergence, emerging. Welcome to the revolution. It is action and contemplation birthing something new, which is also the most ancient thing of all. We are living into the birthplace of ancient-future faith. It is a revolution born of dancing, and like the adage (once attributed to Gloria Steinem but actually from Emma Goldman) we speak loudly into the space of possibility, “If I can’t dance, I don’t want to be part of your revolution!”

In summary: It is our choice. Each one of us. We can move into a New Wave of Emergence. With this we have the opportunity to move into what is emerging and possible beyond the binary state of critique, rage, and hurt into a space of hope and healing. Powerful justice comes from this place. Powerful reconciliation is born out of this freedom. It IS our choice, each one of us. The work is still hard and the road is still long, but it is  built on the foundation of transformative hope and healing action, given to us by teachers of generations ago and present day who have and are living life that matters from a place of healing and possibility.  As a postmodern movement we have the posture and practices to be able to hold the tensions of the most painful dualities.  Is that not the work of ministry?  Our movement can hold, love and transform woundedness. So no one has to be excluded. That is the work if we only choose to engage it.

This site uses Akismet to reduce spam. Learn how your comment data is processed.